Hello, you are using an old browser that's unsafe and no longer supported. Please consider updating your browser to a newer version, or downloading a modern browser.

Daniel J. Keating Company has been recognized as a leader in the Philadelphia construction industry for more than a century. The builder of many of the city’s premier structures, Keating’s work is woven into the very fabric of Philadelphia. Keating’s expertise includes large-scale ground-up construction, historical renovation, industrial development, and school/university construction.

1909
A Philadelphia Story
It All Began With A Pushcart
In 1909, a young, ambitious, union plumber, Dan Keating, decided to go out on his own. He purchased a pushcart and solicited plumbing customers house-to-house. His only helper was his spirited wife, Madeline. He described her as his “adviser, partner, and promoter,” and he often credited her with the success of the company in those early years. With Madeline’s assistance, Dan Keating quickly picked up a diversified list of clients from across the United States, and Daniel J. Keating Company was established as a premier mechanical contractor.
1936
Growing the Business
Daniel Jr. Joins the Company
Daniel J. Keating, Jr. joined his father in the company in 1936. As a registered professional engineer, practical mechanic, and master plumber, Dan Keating, Jr. was a hands-on leader in both the Plumbing, Heating, and Utilities Division and the Sprinkler Division of the firm. Dan Jr.’s only time away from the company was during the Second World War, when he served as Lieutenant Commander in war operations with the “Sea-Bees” in both the Atlantic and Pacific scenes. With Dan Jr.’s unfaltering, principled approach to dealing with both clients and colleagues in the field, the firm steadily grew to be “one of the largest, most efficient, and progressive plumbing and heating firms in the country … identified with many huge construction projects” across the nation. (JAPPFI Journal, October 1952).
1968
General Contracting Division
Adding a Third Division
In 1968, Daniel J. Keating Company opened its General Contracting Division, and decided to focus its considerable experience and building acumen in that market. Daniel J. Keating, Jr. led the venture with the same principled, and disciplined focus that was the hallmark of his style. This style resulted in national and international success. Daniel J. Keating Company steadily grew into one of the largest and most respected general contracting firms in the Philadelphia area, and beyond.
1990s
A Family Commitment to Excellence
Third Generation at the Helm
Daniel J. Keating and his wife, Madeline, began the company with a vision: excellent workmanship, principled business practices, and deep-seated loyalty to both client and employee would ensure success. Dan Keating, Jr.’s sons, Dan Keating III and Pierce Keating, joined the family business with the same vision. Eventually, Dan Keating III embarked on his own successful ventures, and since the 1990's, the Daniel J. Keating Company has been in the capable hands of Pierce Keating. In 1992, Steve McKendrick, Pierce's brother-in-law, joined the Company, and has been instrumental in the company's impressive growth . Recently, Pierce Keating, Jr. has taken on commanding leadership responsibilities as well.
1909 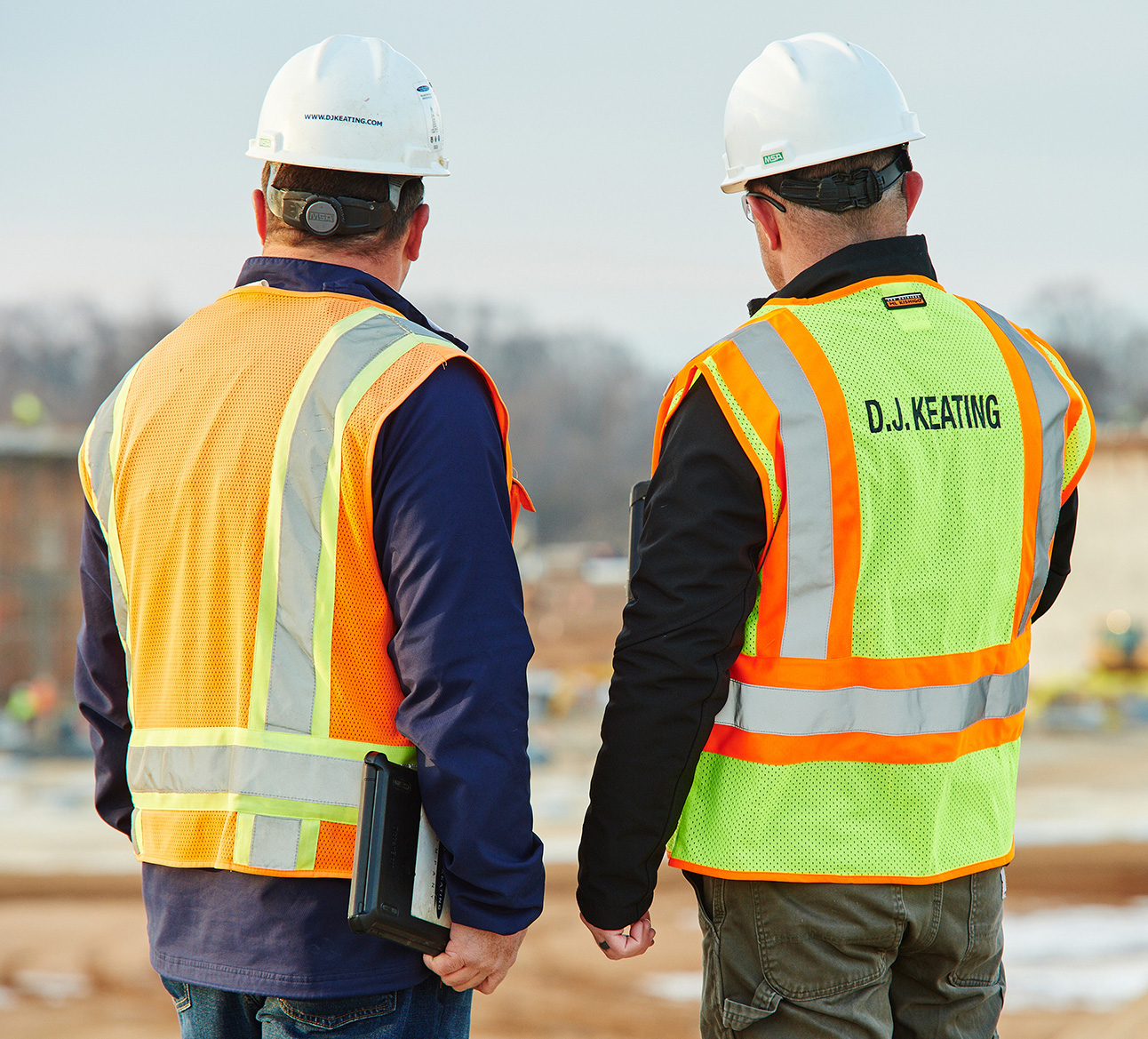 Daniel J. Keating Company has long considered Jobsite Safety to be the most important consideration of construction activity. Keating has developed a comprehensive Safety Program that has yielded excellent results in worksite safety. The program is overseen by Keating Safety Director, Anthony Bell, whose impressive training and experience help to ensure the safety of the men and women who work on and visit our projects. 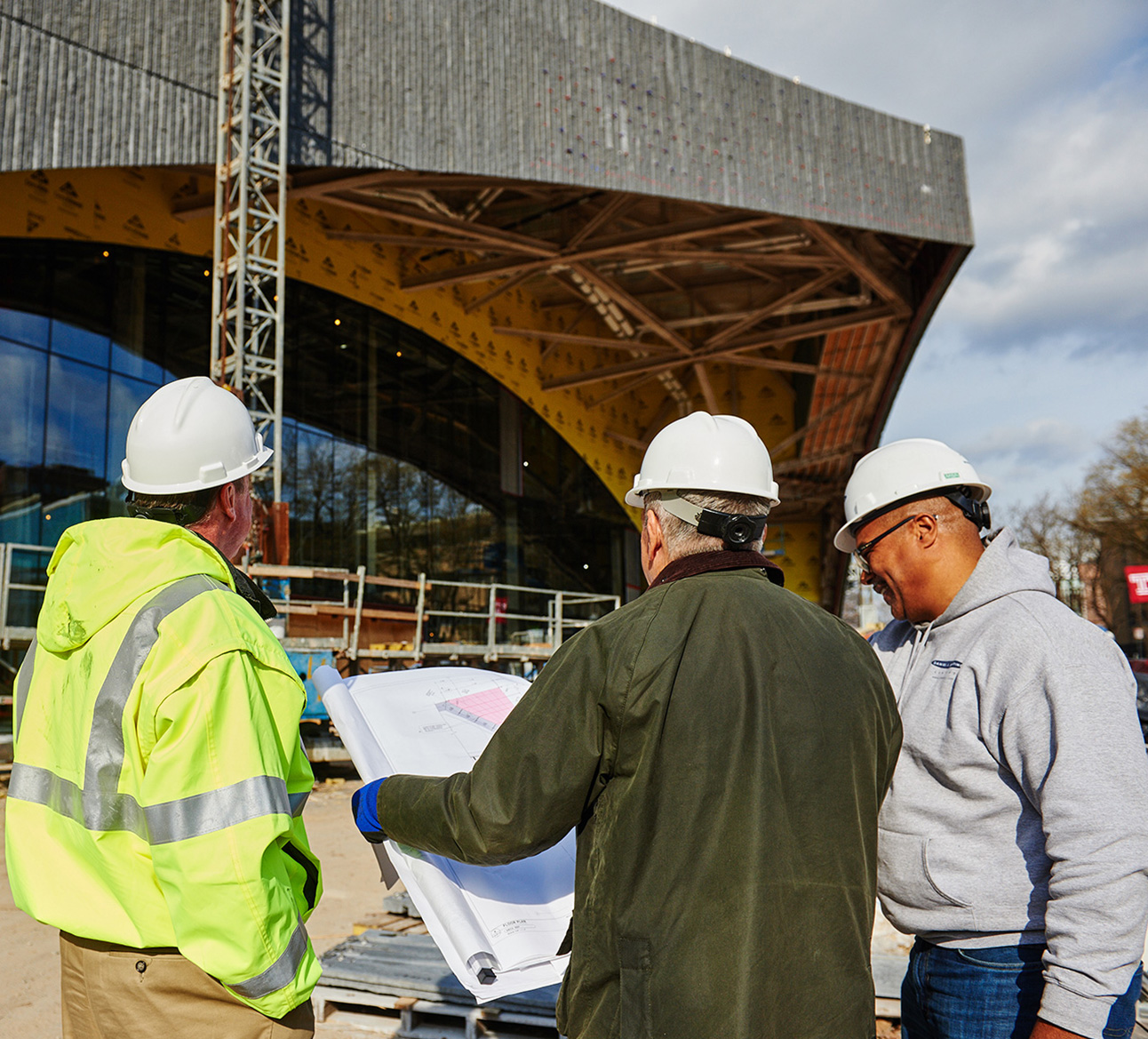 Daniel J. Keating Company is committed to the goals of diversity and inclusion in the workplace. We make every effort to create opportunities for disadvantaged, minority, and women-owned companies in the construction arena, and we strive to advance the objectives of diversity on our jobs and in our company. Keating maintains an updated database of certified firms in order to stay in contact these companies on a consistent basis, and especially throughout the bidding process, affording every opportunity for disadvantaged, minority, and women-owned companies to become part of the project team. 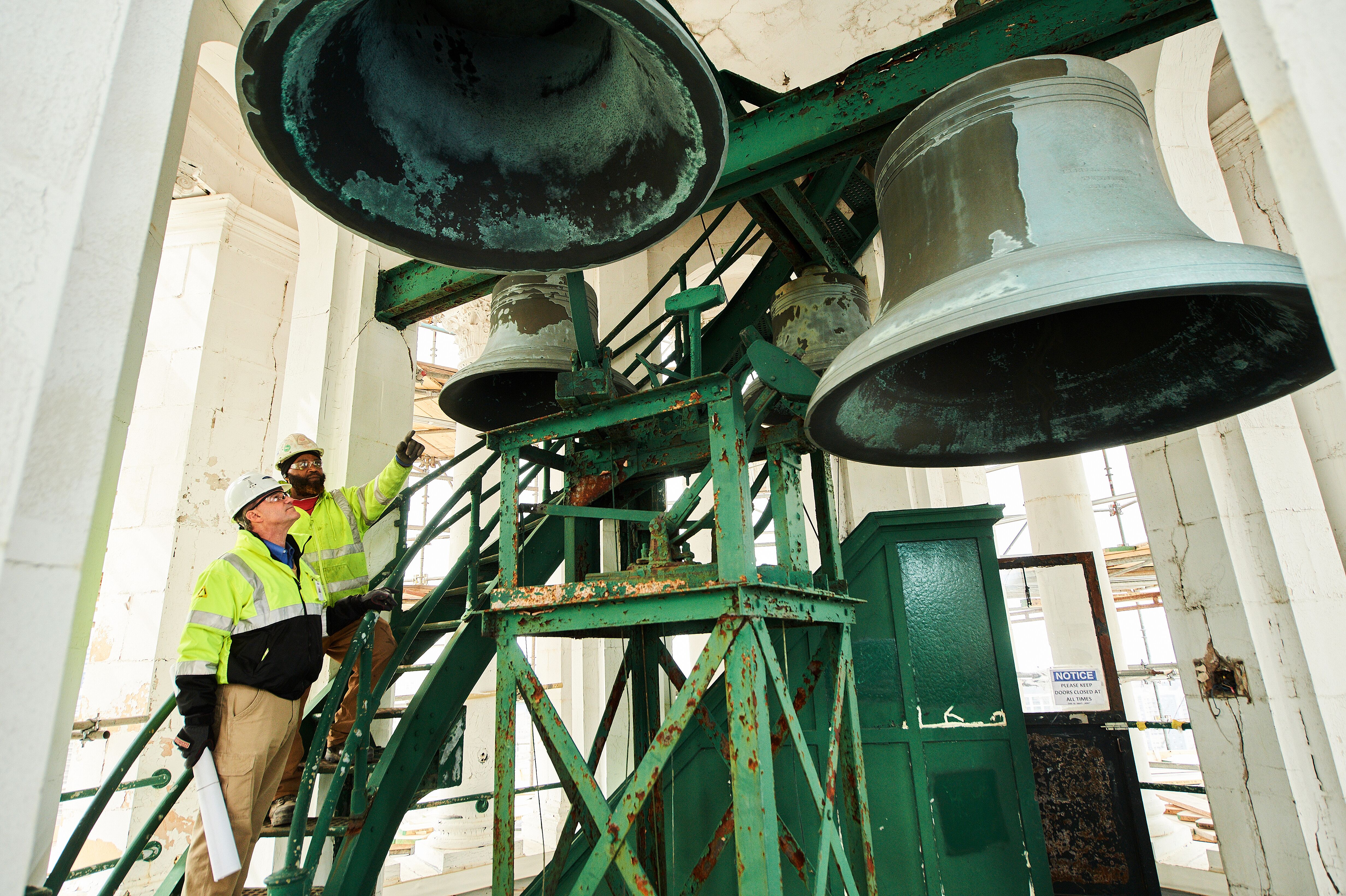 In responding to the call for sustainable, responsible, quality construction, Daniel J. Keating Company is vigilant in its efforts to use energy-sustaining building techniques, with attention to the area’s natural resources and the community environment. Keating keeps constant watch on its construction waste-management practices, the indoor air quality on jobsites, consistently applying the highest sustainability practices in the industry in order to minimize detrimental impacts to the environment and promote healthier indoor working and living spaces. Our Project Teams are trained in sustainable construction, many with LEED certifications and specialty accreditations. 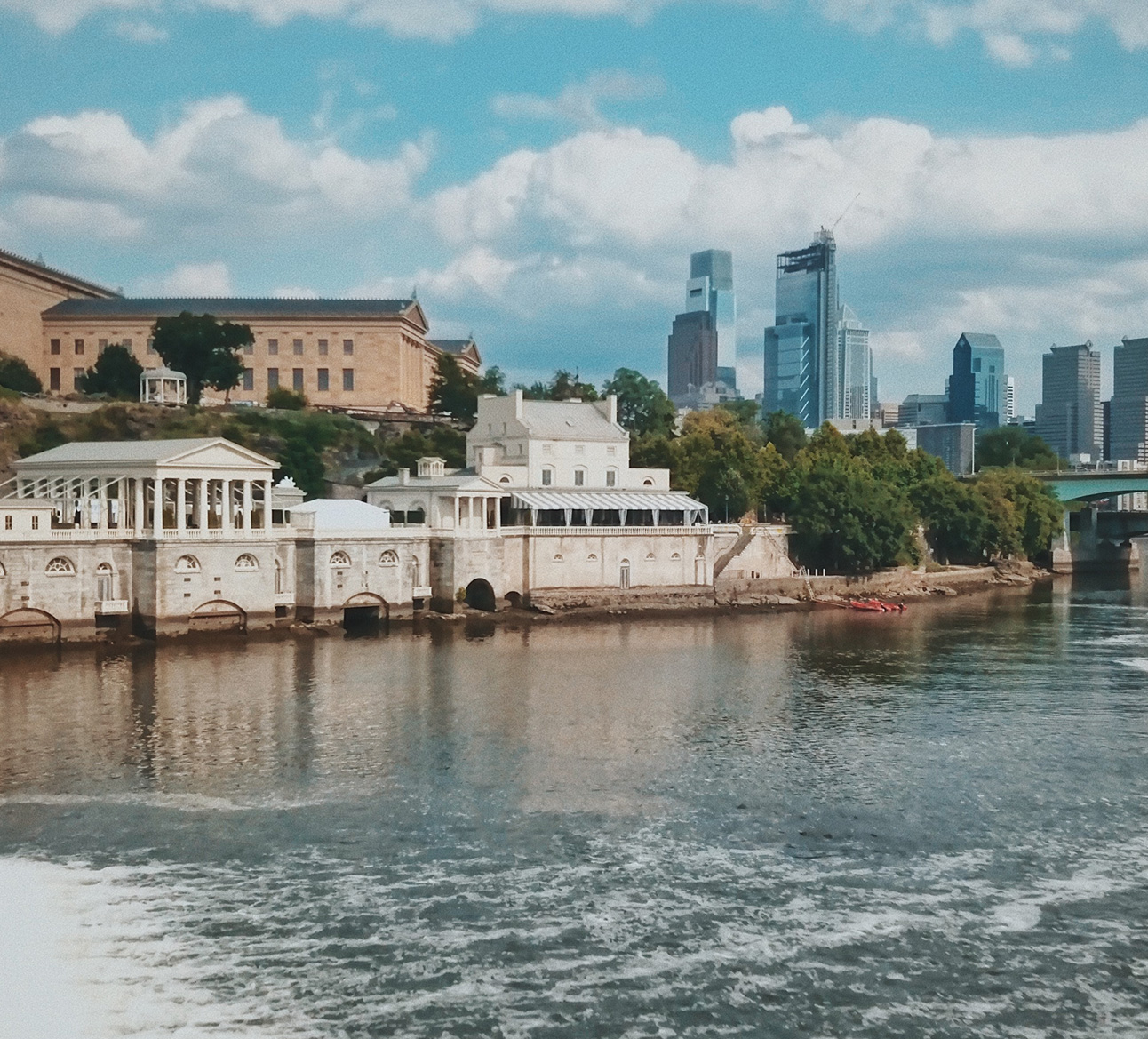 As a notable builder in the City of Philadelphia, Daniel J. Keating Company has a responsibility to the residents and community of our historic city on both a professional and civic level. Various governmental as well as private organizations have honored and awarded Keating’s commitment to authentic excellence in construction and renovation in Philadelphia over the past decades. 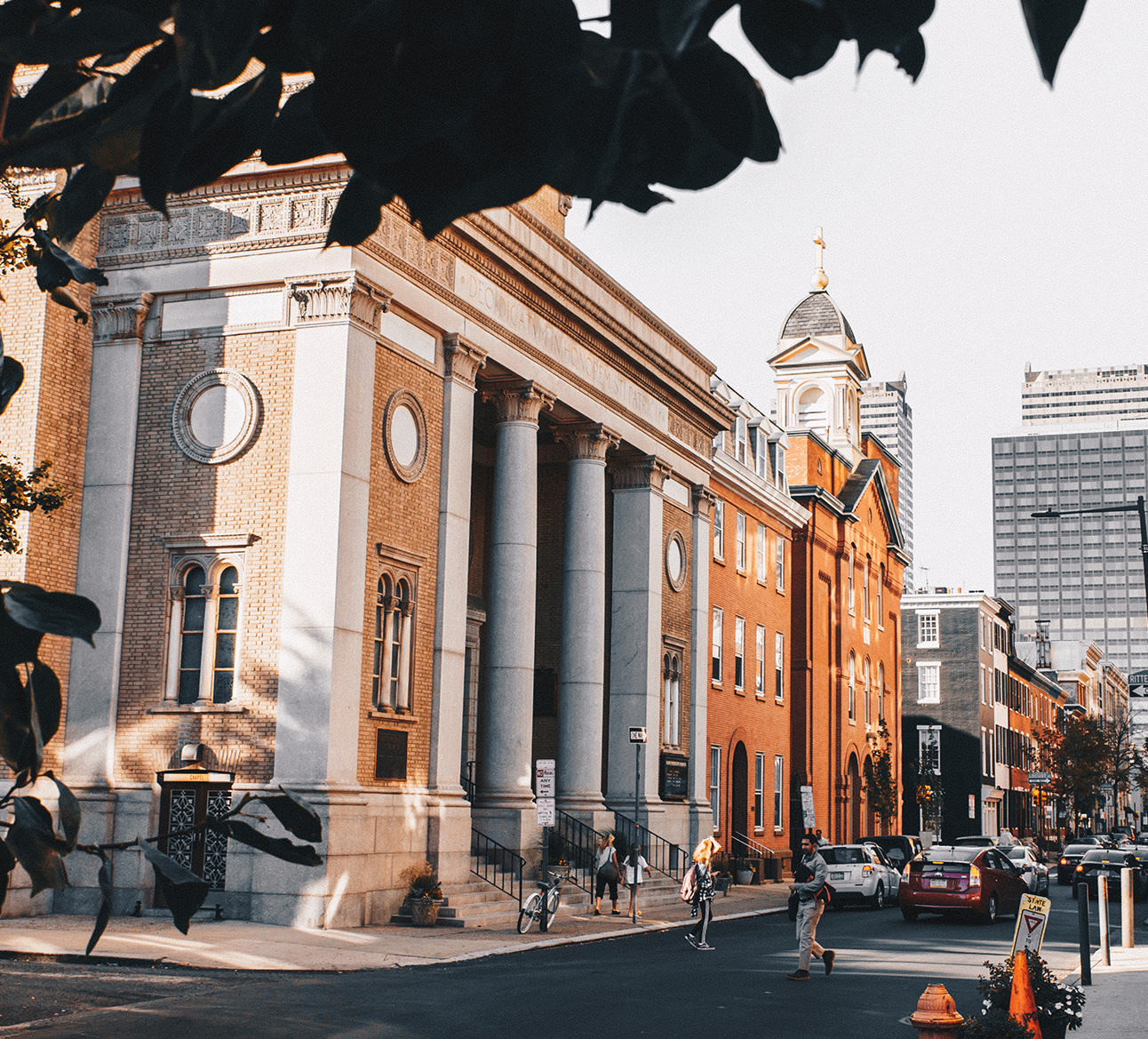 The mission of Daniel J. Keating Company is not simply building buildings. Since 1911, the Keating family has focused its efforts on building communities, helping individuals in need, striving for a better Philadelphia for all who live and work there. In its charitable efforts, the Keating family works closely with and supports a number of organizations, including: The Boys and Girls Club of Philadelphia, Rock Ministries, and Drexel Neumann Academy.